A Visit to the Shawnee Indian Cemetery

It might be hard to spot – plenty of local residents may not even realize it exists – but nestled in an unassuming Shawnee neighborhood is a significant piece of Johnson County history. The Shawnee Indian cemetery, located near 59th and Nieman, houses the remains of a few dozen members of the Shawnee Indian Tribe – some of Shawnee’s earliest founders. The cemetery is small, easily mistaken for a backyard or vacant lot, but its story tells us much about the county’s origins and the people who made it what it is today.

In the early 1830s, the United States government ordered some 900 Shawnee Indians to vacate their lands in Ohio and reestablish themselves in an area of eastern Kansas that included what is now Johnson County. The following decades saw a steep rise in demand for farmable land in the territory and, as a result of several removal treaties and the Kansas-Nebraska Act, the Shawnee had lost much of their land by the 1850s. In the Shawnee Treaty of 1854, the Shawnee Indian Tribe ceded much of their remaining land back to the federal government, with a five-acre area to be preserved for use of a Methodist church, meeting house, and burial ground. The Shawnee Indian Cemetery, officially established in the Shawnee Treaty of 1854, is part of that land. Two of the treaty’s integral facilitators, Charles Bluejacket and Joseph Parks, have ties to the cemetery.

Charles Bluejacket, often called the “Father of Shawnee,” was chief of the tribe from 1861-1864 and acted as an interpreter, minister, and government liaison for much of his life. He was also a successful area businessman and farmer and used his connections to ease tensions among settlers, negotiate land treaties, and advocate for better treatment of his people. Bluejacket himself was buried in Oklahoma, but two of his wives and five of his children were laid to rest in the Shawnee Indian Cemetery. Some of their headstones remain intact.

An engraving of Charles Bluejacket from the 1874 atlas of Johnson County. Source: Johnson County Museum Collection on JoCoHistory.org

Another notable figure buried in this small cemetery is Captain Joseph Parks, a chief prior to Charles Bluejacket, interpreter, and representative of the tribe for many decades. It was Parks who led the Shawnee Tribe to Kansas from Ohio at the behest of the government, and he was one of the original signers of the Shawnee Treaty. Parks was also involved, along with Thomas Johnson (Johnson County’s namesake), in the Shawnee Methodist Mission and Manual Labor School located in today’s Fairway. 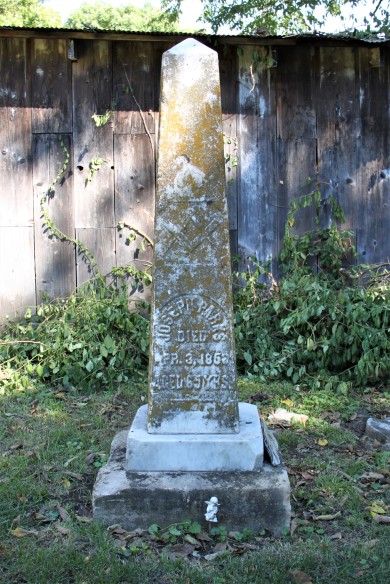 The grave marker of Joseph Parks is one of the few that still stand upright in the cemetery. Parks died in 1859. Source: Sam S, Johnson County Library 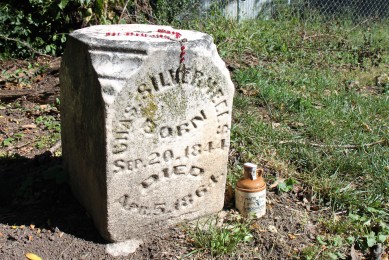 The cemetery also houses the remains of members of the Silverheels, a prominent Shawnee Tribe family, and the Chouteaus – French descended fur traders. Visitors to the cemetery have left gifts at this site. Source: Sam S, Johnson County Library

The area was used for the agreed-upon purpose for several decades, though the meeting house and church were eventually repurposed for military use during the Civil War and subsequently torn down. The cemetery itself was in active use until remaining members of the Shawnee Indian Tribe migrated to Oklahoma – then called “Indian Territory” – in 1875. Shortly before his death in 1897, Charles Bluejacket left the five-acre tract of land to a local grocery store owner, Peter Wertz, with the agreement that Wertz would be free to farm the land as long as he respectfully maintained the cemetery. After Wertz’s death in 1905, little was done to preserve the cemetery until the Shawnee Mission Indian Historical Society took ownership in the early-1930s. The Kansas State Historical Society later took possession of the plot, but distance, lack of funding, and other projects left the site in a poor state. As of 2007, the City of Shawnee owns and maintains the property. It is open year round and welcome to visitors.

The Shawnee Indian Cemetery in September of 2018

2 responses to “A Visit to the Shawnee Indian Cemetery”

This site uses Akismet to reduce spam. Learn how your comment data is processed.